When I visited the U.K. last year, my colleagues at the University of Bristol had just planned a bake sale. Everyone would bake something at home, and everyone was buying stuff off each other (for themselves, or kids, neighbors, grandparents etc) with all the proceedings going to a good cause that the organizing team picked (the organization alternated). I loved it so much, I am still determined to introduce bake sales in the work place back here in the Netherlands. One of the guys had made millionaires’ shortbread, which is basically the same as chocolate caramel shortbread, but that doesn’t sound nearly as magnificent. He used a recipe from Waitrose, which is an upmarket chain of British supermarkets. 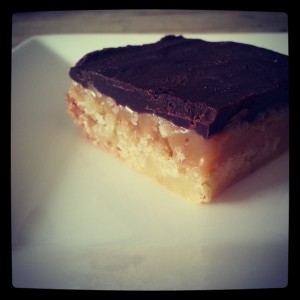 If you’re not baking for any sale, make sure you could stand to gain a few pounds, because millionaires’ shortbread will make you want to eat the whole batch and gain a million.